Dr. Juliette Madan quoted on the possibility of a microbiome in utero

Children's Center investigator Juliette Madan was quoted in Nature regarding bacterial colonization of infants in utero: "There's very little in and on the human body that could be considered sterile," says Juliette Madan, a neonatologist at Dartmouth-Hitchcock Medical Center in Lebanon, New Hampshire. But a handful of microbes does not necessarily mean there's a complex, thriving microbiome. Madan doesn't expect researchers to find any meaningful sharing of bacteria between mother and fetus."

Center Director Margaret Karagas was quoted in a New York Times article about exposure to arsenic through rice in infant food products.

The NIEHS/EPA network of Children's Environmental Health and Disease Prevention Research Centers have released an impact report. See our work highlighted on pages 23, 42-43, 60, 63, 66, and 75! 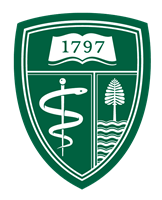 The Dartmouth Children's Center's collaborative research with Dr. Rebecca Fry's lab on arsenic metabolites in infants and pregnant women was cited in a feature in NIEHS's Environmental Factor.

Information on Arsenic in Food, Water & Other Sources

Arsenic and You: Information on Arsenic in Food, Water & Other Sources 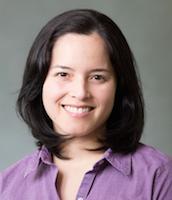 Center Article named an NIEHS 2017 Paper of the Year

Dr. Diane Gilbert-Diamond was lead author on the paper, "Relation between in utero arsenic exposure and birth outcomes in a cohort of mothers and their newborns from New Hampshire," published in Environmental Health Perspectives.

Created in partnership with Dartmouth's DALI lab, we are excited to share our new tool for educating parents and the public about sources of arsenic and reducing exposure.

The Children's Environmental Health and Disease Prevention Research Center at Dartmouth invites applications for an interdisciplinary postdoctoral training and career development program in the fields of epidemiology, biostatistics and bioinformatics.

Dr. Margaret Karagas weighed in on a Health.com article on cooking methods to reduce arsenic in rice.

The Center investigators' article was on infant arsenic exposure due to rice products targeted towards children.

New Center Investigator Dr. Megan Romano was quoted in an Environmental Health Perspectives article on her research on breastfeeding and maternal chemical exposures.

Kids' Genes May Influence Whether Food Advertising Makes Them Overeat

In a study published in the International Journal of Obesity, Dr. Gilbert-Diamond found an association between FTO rs9939609 genotype and eating in the absence of hunger in response to television food advertisements.

October 13th is the first Children's Environmental Health Day! Together we can achieve a society where all children have access to clean air and water, safe and healthy foods, and safe toys and products.

Check out the Blueprint for protecting children's environmental health here.

In a recent study published in JAMA Pediatrics, Children’s Center researchers found that infants who ate rice and rice products had higher urinary arsenic concentrations than those who did not consume any type of rice

F.D.A Proposes a Limit on Arsenic in Rice Cereal for Babies

Arsenic and Latent Disease Risk: What's the Mechanism of Action?

Delivery and Feeding Modes as Associated with Infant Intestinal Microbiome

Children's Center Researchers report on the association of cesarean delivery and formula supplementation with the intestinal microbiome of infants in JAMA Pediatrics, which was highlighted in National Public Radio's "Science Friday," and was featured in the February NIEHS "Environmental Factor" Newsletter following the recent NAS Microbiome Workshop

Placental Metal Concentrations in Relation to Maternal and Infant Toenails

Got Kids? Test Your Well Water for Arsenic

Dr. Carolyn Murray the Director of the Children's Center Community Outreach and Translation Core encourages everyone to test their well water for arsenic in a DHMC Imagine Better story.

In a recent study led by Children's Center Investigators available in the December 2015 issue of Pediatrics, researchers explore how television food advertising may undermine the ability of parents to identify and encourage healthy choices for their children

Obesity Rates in the United States

Link to the article

A new study from Center members discusses how maternal arsenic exposure during pregnancy can lead to respiratory infections in the infant during the first year of life.

Link to the publication

In the first and largest studies that examine variations of genetic expression and control, Center investigator Dr. Carmen Marsit and colleagues report on imprinted genes expressed in the placenta.

Center Director, Dr. Margaret Karagas, in a collaborative commentary to further empower health care providers about the exposures of arsenic through the consumption of rice.

In a recent Nature story, Center Director Dr. Margaret Karagas, comments on new cooking methods that flush up to 57 percent of arsenic out of rice

The Office of the Provost announces a new collaborative cluster initiative to enhance and extend Dartmouth's successful and distinctive history in pioneering interdisciplinary programs focused on water issues. Dr. Margaret Karagas, Children's Center Director, is one of the coordinating faculty for this novel and exciting new opportunity.

Risk of death from cardiovascular disease associated with low-level arsenic exposure among long-term smokers in a US population-based study was recently published by Center Members in Toxicology and Applied Pharmacology.

Link to article in PubMed

COTC Director, Dr. Carolyn Murray published a recent Op-Ed piece in the Valley News on the importance of testing well water for arsenic.

A recent study published in the Journal of Pediatrics explores the dangerous relationship between energy drink consumption and the risk of alcohol use disorder amongst young adults.

The Children's Environmental Health and Disease Prevention Research Center was a proud co-sponsor of the 8th Annual Integrative Biology Symposium on Epigenetics, held April 21-22, 2015. This event was free and open to the public.

Children's Center researchers investigate placental arsenic concentrations in relation to both maternal and infant biomarkers of exposure in a new study published in the Journal of Exposure Science and Environmental Epidemiology.

Link to Pub Med
US News

Dr. Brian Jackson, Center investigator and the director of the Trace Metal Analysis Core Facility at Dartmouth, was interviewed for a New York Times piece on arsenic in rice crackers.

Center Investigators delve into the associations between gut microbial colonization in early life and respiratory outcomes in cystic fibrosis in a recent Journal of Pediatrics manuscript.

Center researchers, Drs. Emond and Gilbert-Diamond, speak to the correlation between excessive weight gain during youth and cancer risks later in life.

Link to the full story

Center Members met with Dr. Samara Nielson from the CDC, and attended her presentation on seafood consumption and blood mercury concentrations in adults February 25, 2015

Children's Center Researchers publish on the estimated exposure to arsenic in breastfed and formula-fed babies in Environmental Health Perspectives.

"With the Children's Environmental Health Centers, we're working to educate the community about what the science is telling us, and how it may help the community and help shape public health policy," Nadeau said.

Drs. Margaret Karagas and Carolyn Murray presented to the FDA Food Advisory Board on Arsenic Levels in Food, December 2014

The Dartmouth Board of Trustees approved the new academic Department of Epidemiology at the Geisel School of Medicine at Dartmouth. Children's Center Director, Dr. Margaret Karagas, will lead this new department.

Members of the Children's Center contributed to the "Health Effects and Mitigation of Arsenic: Current Research Efforts and Future Directions" Workshop and Webinar Discussion Series report, which is now available online.

Researchers from the Children's Center team with the Superfund Research Program, the Thayer School of Engineering at Dartmouth, and the New Hampshire Department of Health and Human Services to report on the health impacts of drinking water from private wells in New Hampshire. 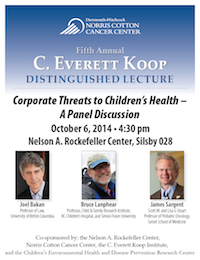 Children's Center Researchers explore the Dietary-Wide Association Study (DWAS) of environmental Metal Exposure in US Children and Adults in PLoS One.

"We could hardly ask for a better speaker for this event," said NIEHS and NTP Director, Dr. Linda Birnbaum.

Infant Toenails as Biomarker of In Utero Arsenic Exposure

In a recent publication in the Journal of Exposure Science & Environmental Epidemiology, Children's Center Researchers from all three projects, collaboratively explore the relationship between infant toenails and in utero arsenic exposure.

Dr. Karagas and colleague's recently published paper in Pediatrics on the incidence of early-onset skin cancer and associated risks with indoor tanning was cited in the newly released 2014 Surgeon General's Call to Action to Prevent Skin Cancer. The report outlines the risks and action steps to reverse the alarming rise in the incidence of skin cancers in the US population.

Children's Center Director, Dr. Margaret Karagas, was appointed to the Squires Professorship at the Geisel School of Medicine at Dartmouth.


For More Information
To Register

Associations between hormones and neurodevelopment

Exploring the Linkages Between Ecosystem Services and Human Health

Dr. Kathleen Bush, Research Assistant Professor, Center for the Environment at Plymouth State University, and former US EPA fellow, will visit Dartmouth and present on Thursday, May 22, 2014

During an upcoming NIEHS Superfund Research Program (SRP) webinar series on the current state of knowledge and data gaps in the field of arsenic environmental health research, Dr. Marsit will serve as an expert panelist at the "Susceptibility to Arsenic Effects" webinar, May 7, 2014, 1:30-3:00 pm.

To Register for Webinar

Low-Dose Arsenic: In Search of a Risk Threshold

Dartmouth has commissioned artist Fay Wang to compose a symphony exploring the relationship between science and music. Center Researchers were interviewed about their work, and the relationship between microbes and human health. This truly translational project is inspired by the work being done within the Children's Environmental Health and Disease Prevention Research Center at Dartmouth.

Children's Center PhD student, Matthew Davis and colleagues examined the prevalence and success of doctor jokes posted on Facebook in one of the first studies of social networking site conversations pertaining to health and medicine.

The study is published in the February edition of the Journal of Medical Internet Research.

Diet alone can be a significant source of arsenic exposure

Continued coverage of a Dartmouth-led study that found diet alone can be a significant source of arsenic exposure. Of the foods tested in the study, Dartmouth researchers found that white wine, beer, dark-meat fish, and Brussels sprouts raised people's arsenic levels the most significantly. Lead researcher Kathryn Cottingham, professor of biological sciences, is quoted in the article.

Children's Center researchers are examining exposure to low-level arsenic via water and food, which is gaining national attention

Children's Center research has brought low-level arsenic exposure to light and has inspired the U.S. Food and Drug Administration to test rice and rice products for arsenic, and conduct analyses on the long-term exposure effects.

Development of the Fetal Microbiome

"The Allergy Buster: Can a Radical New Treatment Save Children With Severe Food Allergies?"

Dr. Juliette Madan was inducted into the Society for Pediatric Research