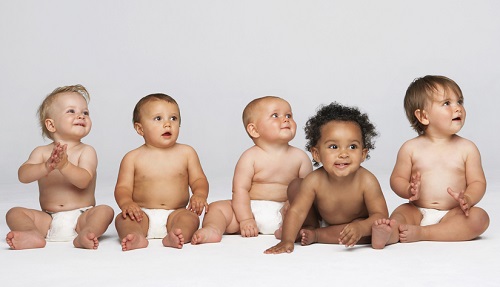 "With the expansion of the center, we will have the opportunity to deepen our understanding of environmental exposures to common contaminants such as arsenic during fetal development and childhood; and the impact these exposures have on childhood immunity, growth, and neurological development,"

Dartmouth's interest in the effects of arsenic toxicity on the young has its roots in studies initiated in 2009. These extensive ongoing studies began with a group of pregnant New Hampshire women who obtained their household water from a private well in areas where some of the water supplies have been found to be arsenic-laden. The offspring of the women will also be studied to determine how these children might be affected over time by relatively low-level arsenic exposure. The Center, in its pilot phase, discovered that certain foods contributed to arsenic exposures in children, including rice and rice products, and recently reported findings of increased infection risk in children (Environmental Research, 2013), and changes in DNA in umbilical cord blood (Environmental Health Perspectives, 2013) and placenta tissue, relating to low birth weight (Environmental Health, 2013), associated with in utero arsenic exposure.

Our study obtains exposure data, innovative biomarkers beginning in early life, and measurable health outcomes. This approach makes it possible to inform interventions and changes in medical practice which have great potential to improve human health over the entire life span. The progressive research concept of our center transitions from the initial exposure, to how those exposures are reflected in biologic tissue samples, and in turn markers of biologic response to environmental agents, and to the health outcomes which ultimately lead to change and regulation.

"The center will conduct research that can help us develop and implement strategies to prevent diseases associated with arsenic and other exposures in children," says Karagas, a professor in the Department of Community and Family Medicine at Geisel School of Medicine at Dartmouth.

Karagas says that the center’s mission is to identify and address key emerging issues related to health impacts of early life environmental exposures. "There is growing research connecting exposure early in life to a number of prevalent and life threatening diseases for children," she says. "Moreover, early life exposures and their effects also appear to extend beyond childhood."

Evidence suggests that environmental exposure may affect the development of the immune system, and in turn infant risk of emerging diseases such as allergies and asthma, she says. Diseases known or suspected to be caused or aggravated by arsenic in drinking water include various cancers and cardiovascular disease. 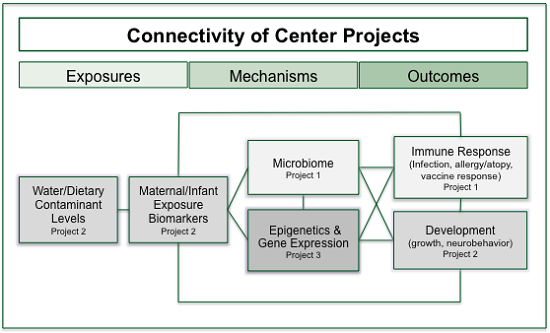 "Additionally, risk of obesity, which has greatly increased in prevalence in both children and adults, is influenced by factors occurring early in life," says Karagas. "Therefore, if environmental contaminants increase early life growth, they will heighten risk for obesity which is a major risk factor for cardiovascular disease and cancer."

This figure displays the inter-relation between the individual projects. The projects within the Center were designed to maximize the sharing of samples and data collected. The connectivity of our Center research can be seen from the extensive utilization of water and biological samples, through to the responses of the measurements taken.

Interwoven projects and Cores constitute the essence of the center's research pursuits:

Project 1, "Childhood Immune Function and Exposure," is led by Karagas, and is investigating the effects of exposures on both mothers and infants, and their susceptibility to allergies and infection. The project builds on the study begun in 2009 of pregnant New Hampshire women, whose well water had elevated arsenic levels. The health of their children will be evaluated by the study team.

Project 2, "Water and Dietary Arsenic Exposure Related to Early Growth and Neurodevelopment," is led by Kathryn Cottingham, professor of biological sciences, Susan Korrick, an assistant professor in the Harvard School of Public Health and Diane Gilbert-Diamond , an assistant professor of community and family medicine at Geisel. This project quantifies arsenic exposure through water and food during infancy and early childhood and determine its impact on growth and neurological development. This augments exposure data collected from the children identified in the first project, from conception to age 5.

Project 3, "Placental Biomarkers of Exposure and Outcome," is led by Carmen Marsit , an associate professor of pharmacology and toxicology, and of community and family medicine at Geisel, and David Robbins, a professor in the School of Medicine at the University of Miami. This project examines epigenetic and gene expression changes in the placenta in relation to arsenic exposure and health effects.

John Moeschler serves at the Child Health Specialist for the Center, and Carolyn Murray directs the Community Outreach and Translation Core to ensure research findings are communicated with key stakeholders including the medical community and the public.